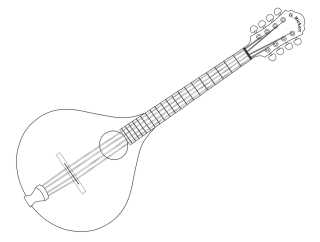 Several months ago, a number of volunteers from the Facebook “The Irish Bouzouki” and “Octave Mandolin” groups kindly completed a survey about Big Mandolin/Irish Bouzouki Attribute Preferences. The survey also queried participants about pricing preferences and tolerances. Volunteers were also solicited from my own Facebook business page, D. Rickert Musical Instruments (aka DonRickertMusicianShop) as well as my personal Facebook page, Donald Rickert (aka Donald.rickert1).

I wish to once again thank everyone who participated. Our new company, Rickert & Hale's initial offerings in the octave mandolin/cittern/Irish bouzouki space will take the findings summarized below into serious consideration, combined with other research we have conducted. Rickert & Hale is a joint venture with fellow luthier Dr. Jesse Hale specifically to produce mandolin family instruments, with an initial focus on octave mandolins, citterns and Irish bouzoukis. Check out our new website: www.RickertandHale.com. Our sister company's website, D. Rickert Musical Instruments, will continue to focus on our renowned violoncellos da spalla, octave violins and the like.

As promised, here are the key insights derived from the survey responses. A companion report in PDF format containing top line summary statistics and graphs is available for download. Additional advanced analyses of the textual responses related to attribute preference data are not included here; however, it is easy to see what is going on by reading the summary statistical report. I assume that most people are interested in the interpretation of the raw data, which are summarized below.

One must interpret the results with caution, as more than half of the respondents are members of the Irish Bouzouki Facebook group. This and other biases of an unknown nature notwithstanding, an interesting and useful picture can be drawn. Read on…

As I am sure will no surprise, at least as measured by the survey, the large mandolin family enthusiasts are not a monolith. This is probably true, as it accords with other research I have conducted. At least among the respondents to our limited survey, it is clear that there are two surprisingly distinct groups with only a small overlap. Among our respondents, about half are in one group and the other half in the other. The first group is made up of Octave Mandolin players and second, Irish Bouzouki players.

All of the Octave Mandolin players and about half of the Irish Bouzouki players are also mandolin owners or prospective owners. A smaller but not insignificant number of both the Octave Mandolin and Irish Bouzouki players’ groups also play or plan to acquire a tenor guitar, tenor banjo or mandocello. Surprisingly, very few of either group express interest in mandolas or citterns. I, for one, find the lack of expressed interest in citterns as surprising if not outright shocking.

Some similarities in attribute preferences between the two groups

There are a number similarities between the Octave Mandolin and Irish Bouzouki groups with respect to attribute preferences and, to a lesser extent, what they are willing to pay for an instrument.

High preference for either a teardrop or onion shape.

There is a high preference for these two similar shapes, regardless of sub-group membership.

Surprising level of active dislike for Flatiron style instruments across both groups.

Nothing more to be said about this except that it is surprising, given that Flatiron 3K and 3M Octaves Mandolins are quite sought after. The last Weber 3K I had in my shop sold in less than a day for just under $4,000.

This is not that surprising, as the F-type is very much associated with the mandolin world, especially Bluegrass artists.

On average, respondents have expectations with respect to cost that diverge from those of many luthiers.

It appears that most respondents are looking for a purchase price in line with factory-made Asian instruments, which are rebranded as Trinity College, Gold Tone, Fender and the like, or simply sold outright as Asian-made instruments on eBay.

The octave mandolin group, however, had a small number of respondents who believe that the instrument of their dreams will cost in $5K to $6K range.

No one surveyed expressed a willingness to pay $7K or more for a high-end luthier-built instrument. This, despite the fact that the real-world price for a luthier-built octave mandolin can easily exceed $10,000, with some selling for more than $20,000!

Both groups are willing to compromise sound and build quality for low cost.

Respondents are more willing to compromise with respect to fit and finish (e.g., setup, fret work, etc.). Presumably this is because people believe that a lot of workmanship issues, cheap tuning machines and such can be fixed post purchase. This is probably true; however, the cost of fixing a poor fret job and replacing the tuners can easily exceed the initial cost of a low-end instrument.

Archtop instruments, with the exception of the round-holed A-type, are generally only appealing to some octave mandolin players and enthusiasts.

In general, across both the octave mandolin and bouzouki groups, archtop instruments of any shape are not preferred. There are, however, serious fans of the guitar shape among octave mandolinists.

Players who prefer scale lengths longer than 24” almost always capo on the 5th or 7th fret; sometimes even higher! This accords very much with the large number of available videos of the Irish bouzouki being played.

23” is considered a long scale for an octave mandolin. Players of these long-scale octave mandolins may sometimes capo on the second fret, but this is not that common.

Once again, a sincere thanks to all who responded. Very soon we will be posting an announcement of several mandolin-family instruments by our new company Rickert & Hale, including a bouzouki. Clearly, one will note that the pricing is considerably higher than the preferred price point for most respondents. The pricing for the bouzouki we will be announcing may be in the comfort zone of some respondents. I hope that this is the case. This will definitely not be the case for our new archtop octave mandolins and citterns. Be assured that the input from respondents to the survey was not ignored, rather, the input received confirms what we already suspected; which is that our high-end archtop instruments will only appeal to professionals and extremely committed amateurs with the necessary financial resources for master-built instruments. Customers of our archtop octave mandolins and citterns are more likely to be enthusiasts of the Bluegrass, Americana and Old-Time genres rather than the Celtic genre.