This is an update of an article that first appeared on the D. Rickert Musical Instruments site in March 2019.

Here I will briefly lay out the evolution of the mandolin, which appears to have started around 2000 BC, to the heyday of mandolin orchestra and the "Golden Age" of the mandolin in the 1920s. Part 2 will pick up with other developments staring in the 1960s, which culminates in today's New Mandolin Family of instruments. In reality, the mando-bass is such a rarity these days that it should probably be considered an ancestor rather than a “living” family member.

Many also regard the Tenor Guitar as a close mandolin relative.

I am sure that there are many more exotic variants the above instruments.

What follows is a brief history of how modern mandolin family and its close relatives came to be.

Brief History of the Mandolin

A plucked string instrument historically called the mandola evolved as an offshoot of the lute family in Italy in the 15th Century. Later,

during the Baroque period (17th and 18th Centuries), the somewhat smaller and higher-pitched mandolin (literally, small mandola) appeared. By the early 19th Century, the mandolin, in its familiar round staved back (aka “tater bug”) form, with 8 metal strings divided into 4 courses, would become the standard.

By the 1830s, these mandolins were, and still are, widely referred to as “Neapolitan” mandolins, due to the fact that many of the original makers were located in or near Naples, Italy. These early “modern” mandolins were tuned in 5ths like a violin and played with a plectrum (i.e. pick).

There were other antecedents to modern mandolin family instruments, such as the octave mandolin.  The cittern, a strummed instrument with a flat top and back, was popular in Europe during the late Renaissance and early Baroque periods. These instruments generally had four or five courses of metal strings. Citterns, especially later examples are, indeed, almost identical in size and shape to modern teardrop style octave mandolins.

Interestingly, modern octave mandolin-sized instruments are often called citterns, especially when they have 5 courses (either 9 or 10 strings) and/or they are tuned to optimally afford chordal playing, but I digress.

The early European mandolins were, at lease superficially, related to the the lute. The lute itself evolved over many hundreds of years, probably even thousands. For instance, lute-like instruments appear as early as 2000 BC in Mesopotamia. By the 7th Century AD, the Arabic oud was in widespread use in the near East and North Africa. The oud, still in use today, is often viewed as the immediate predecessor to the European lute. The oud found its way into Spain during Moorish conquest (711-1492), then to Venice through coastal trade and northern Europe by returning Crusaders in the 11th and 12th Centuries.

immigration from Eastern and Southern Europe in the middle of the 19th Century. By the 1850s, the instrument was quite in vogue, along with zithers and ukuleles, especially with the increasingly leisured middle class. With the marked increase of Italian immigration in the 1880s, the Neapolitan mandolin became nothing short of a fad. In fact, the mandolin was even among the first recorded instrument on Edison cylinders.

By the end of the 19th Century, Lyon & Healy (i.e. Washburn) was the largest American manufacturer of Neapolitan style mandolins. In 1900, Lyon & Healy boasted that 'At any time you can find in our factory upwards of 10,000 mandolins in various stages of construction'. That’s a lot of mandolins!

In the early 20th Century, there appeared two types of mandolin that could be described as basically flat (or at least flattish), at least when compared to the bowl-shaped Neapolitan mandolins. The first of these two new types was the carved-arch type, with a carved slightly arched back and top, and little, if any, internal bracing; in other words, made like a violin. The second is the American flat-back type.

Gibson introduced a carved-arch (carved arch top and back) mandolin (the “A” or teardrop shape) in about 1904, based on Orville Gibson’s 1896 patent. The first of these were teardrop shaped, now known as the “A-type”.

The iconic “Florentine” or F-type was introduced in about 1910.

The violin-style f-holes now associated with the F-type were introduced in the early 1920s, as a feature of the Lloyd Loar-designed F-5 mandolin. 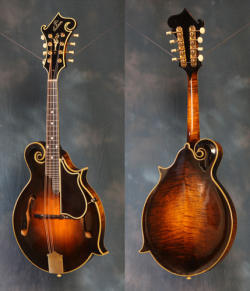 Lyon & Healy and their Washburn division introduced carved back mandolin family instruments in 1912. Some of these instruments have two “points” and a distinctive violin-type head-stock.

Others are basically teardrop shaped with a standard geared peg headstock. As will be described momentarily, Lyon & Healy, as well as Gibson, made larger members of the mandolin family, the mandola and mandocello. Gibson also made mando-basses. There is no evidence that Lyon & Healy made such an instrument.

Near the end of WWI (i.e. November, 1918), Gibson introduced the “A/N” (Army-Navy) mandolin to be sold in military PXs. These simple design mandolins, later revived under the name of “Flatiron”, were oval-shaped and had braced flat tops and backs (like an acoustic guitar). Despite their minimalist appearance, these instruments sound really good! This truly flat style of mandolin is often referred to by the nickname, “pancake style”. 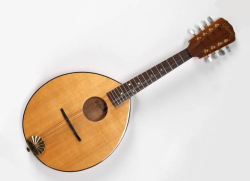 By the 1920s, all of the major American instrument makers were offering mandolins with either an oval or teardrop shape with essentially flat tops and backs. 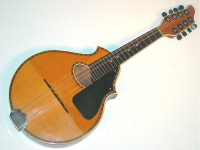 In about 1920, Stromberg-Voisinet introduced their “Venetian” series instruments, which included mandolins, tenor guitars, 6-string guitars and mandocellos. Some of these instruments were flat-top braced instruments and some had carved arch tops and/or backs.

This unique and beautiful “Venetian” shape motif continued with KayKraft, which acquired Stromberg-Voisinet. KayKraft later became Kay and then Harmony. 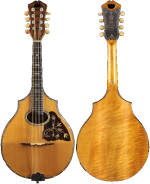 In the ‘teens and 1920s, Vega also made a complete mandolin quartet (including the mandobass) as well as 10-string hybrid instruments that spanned the pitch range between adjacent 8-string instruments. In other words, there was, according to reports but unverified, a mandola-sized instrument with an extra E-course at that high end (tuning: C3/C3, G3/G3, D4/D4, A4/A4, E5/E5; covers the range of a both a mandolin and a mandola). There could also have been a mandocello-sized instrument, likely, also with an extra E-course at the high end (tuning: C2/C2, G2/G2, D3/D3, A3/A3, E4/E4). Such an instrument would cover the range of both the mandocello and the modern octave mandolin.

Mandolin Orchestras and the Idea of a Modern Mandolin Family 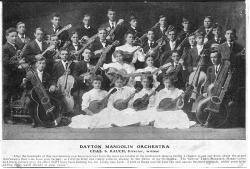 In the years leading up to 1920, the large musical instrument manufacturers, Gibson and Lyon & Healy (Washburn) and Vega were in a battle royale competition to supply amateur mandolin orchestras with instruments. Most would say that Gibson won this competition, mostly due its legendary marketing war machine. Indeed, Gibson had a substantial cadre of employees and associates (e.g. music teachers) whose job it was to drum up interest in and to establish mandolin orchestras throughout the U.S. By the 1920s, these orchestras were common in big cities and small towns across America.

While the notion of larger mandolin family instruments such as the mandola and mandocello may have been around for some time (especially the mandola), it was Gibson that took the idea of an entire mandolin family orchestra to a whole new level. In addition to mandolins, Gibson in its formative years (early 20th C.) introduced mandolas, mandocellos and even the gigantic mandobass. 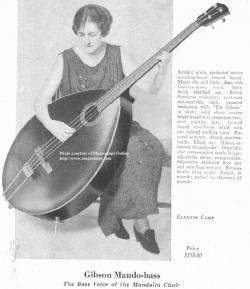 They also introduced guitars with violin-type carved arch backs and tops (today, referred to as “archtop” or “jazz” guitars), built on the same principles covered by Orville Gibson’s 1898 patent for a carved arch mandolin. 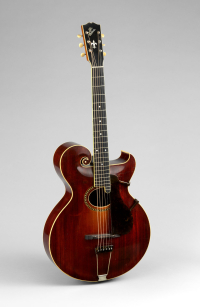 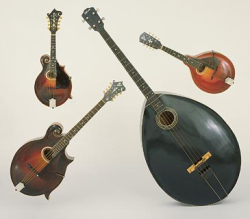 Just as there is no octave violin in a modern orchestra, neither was there an octave mandolin in the mandolin orchestra. Octave mandolins came along much later in the 20th Century, taking their inspiration from folk instruments (e.g. Greek bouzouki) as well as a Renaissance plucked instrument called the cittern, rather than modern orchestral bowed instruments. You can read about that and more in the next installment. See The New Mandolin Family Part 2: Octave Mandolins, Citterns and Irish Bouzoukis