This is an update of an article that first appeared on the D. Rickert Musical Instruments site in March 2019.

This article is Part 2 of 2 and a follow on the article, The New Mandolin Family Part 1: Ancient Mesopotamia to Orville Gibson. We will pick up with other developments staring in the 1960s and culminating in today's New Mandolin Family of instruments.

Here I will discuss the large-bodied tenor range instruments of the New Mandolin Family. These instruments are often called ‘octave mandolins’, ‘citterns’ and ‘Irish bouzoukis’. There is considerable confusion about whether these monikers are synonyms or whether they refer to clearly distinct tenor mandolin variants. I might be able to clear that up for you.

I will also say some more about the modern mandocello, the largest member of the New Mandolin Family, such as the new breed of mandocellos that are hybrids of big mandolins and guitars. There is definitely a trend for octave mandolins with guitar-shaped bodies as well. This is especially true of contemporary high-end octave mandolins, which can cost upwards of $10,000. There are even octave mandolins out there selling for as much as $30,000!

As previously stated, I believe the two most important antecedents to the octave mandolin and its kin to be the Greek bouzouki and the Renaissance/Baroque cittern. It is uncertain who first coined the moniker “octave mandolin”. As described below, the instruments that we now call “octave mandolins” were until recently mostly called bouzoukis, citterns, mando-guitars and even mandolas. Discussion of the origin of modern octave mandolins will hopefully shed some light.

The Greek bouzouki is, like the mandolin, a double-course stringed instrument. Indeed, the mandolin and bouzouki are thought by many to be branches of the same lute family tree, the Arabic oud. The original Greek bouzouki, called the trichordo, was a three course/six-string instrument with a disproportionately long neck (playable string length typically in the 24” to 27”+ range). It looks pretty much like a large Neapolitan mandolin with a really long neck.

In the 1950s the four course/eight string tetrachordo version of the bouzouki was developed. 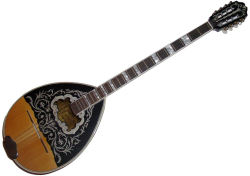 The Irish bouzouki is clearly an adaptation of the Greek bouzouki. Johnny Moynihan, of the trio Sweeney’s Men, is widely credited with introducing the first tetrachordo bouzouki into Irish music. He tuned it to G3/G2, D3/D2, A3/A3 and D4/D4, essentially like today’s octave mandolin tuning, except the low G and D courses were tuned in octaves, as on a 12-string guitar. In the early 1970s, Andy Irvine (Sweeney’s Men, Planxty, Patrick Street) gave his Greek bouzouki to Donal Lunny (Planxty, The Bothy Band). He replaced the low G and D courses with unison strings.

A year or so later, Lunny and Irvine commissioned luthier Peter Abnett to build an instrument with a relatively flat (i.e. 3-piece staved) back and otherwise nearly identical specifications to Lunny’s modified Greek bouzouki. It has been said that the "Irish bouzouki" as a distinct instrument was thus born. The so-called Irish bouzouki could have been a fad, but it has been with us for more than 50 years. Further, its popularity has increased exponentially. Today, high-end luthier built Irish bouzoukis and cheap factory-made copies coexist in a busy marketplace. One of the most active Facebook groups, with well over 6,000 members, is the Irish Bouzouki group.

Almost immediately, new designs built specifically for Irish traditional music began to appear. The body was widened and a flat back with straight sides replaced the multi-staved back. This flat-backed teardrop design became the de facto standard for so-called Irish bouzoukis and “Irish” octave mandolins. Irish bouzoukis and octave mandolins have, at various times, been referred to as “citterns”. I will get to that momentarily.

While all of the initial Irish bouzoukis had flat tops and either flat or flattish backs, a few luthiers such as Stefan Sobell began experimenting with carved arch tops and backs, taking their design inspiration from American archtop guitars and mandolins. 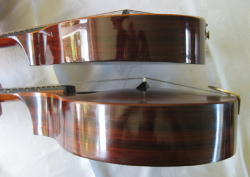 Nevertheless, the majority of makers today continue to opt for flat or flattish tops and backs (i.e. like internally-braced acoustic guitars).

Earlier I mentioned that an important antecedent to the octave mandolin, and mandocello as well, was the Renaissance cittern. The cittern, a strummed double-course instrument with a flat top and back, was popular in Europe during the late Renaissance and early Baroque periods. These instruments generally had four or five courses of metal strings. Citterns, especially later examples from the Baroque period, are almost identical in size and shape to modern teardrop style octave mandolins.

Interestingly, modern octave mandolin-sized instruments and some the size of mandocellos are often called citterns. For many players, and even builders, the terms “bouzouki”, “octave mandolin” and “cittern” are more or less synonymous. Part of the confusion seems to stem from the fact that some of the most influential makers have used different designations over the years to refer to the same instruments and vise versa. Attributes such as scale length, number of strings and string pair tuning (i.e. unison vs. octave), or some combination of these, have been used as differentiators between bouzoukis, octave mandolins and citterns.

On the other hand, if we look at the instruments sold by many of the well-known makers, octave-tuned (two strings tuned one octave apart) lower course strings and, to a lesser extent, longer scale, seem to be the defining attributes of what is called a “bouzouki”. For some reason, all of this almost makes some sense to me. See the image of a modern instrument (below) marketed as an "Irish Bouzouki". It looks just like a teardrop-shaped octave mandolin except for a somewhat disproportionately long neck. It is strung such that the lower two courses are tuned in octaves. It could easily be restrung with the lower courses in unison, just as Donal Lunny did when this story began in the 1970s. I suppose that it could be an octave mandolin with a longer than average neck!

The point is that it matters little today whether a tenor range mandolin family instrument is called and "Octave Mandolin" or "Irish Bouzouki". I believe, however, that "cittern" (actually "Modern Cittern") is still a useful designation to indicate 5 or more string courses.

Influence of the Guitar

Anyone familiar with contemporary mandocellos will have observed that many of these instruments bear a strong resemblance to guitars, flattop as well as archtop (i.e. jazz) guitars. In fact, some modern mandocellos essentially are guitars modified for 4 or 5 double courses of strings. This is no surprise, as the scale lengths (i.e. vibrating string lengths) of mandocellos and guitars are generally the same; between 24.5” and 25.5”.

Also, more than a few contemporary octave mandolins look like small guitars as well. I have seen some that could have been 1920s era tenor guitars with a wider neck to accommodate double rather than single string courses.

Indeed, our own archtop instruments, especially the octave mandolins, tenor citterns and mandocellos are based on the principles underlying the renowned archtop guitars by Robert Benedetto. Our flat top instruments are very much based on best practices laid down by Graham McDonald in his seminal work, "The Bouzouki Book." Indeed, McDonald's book is required reading by all employees of our company, Rickert & Hale, who are involved in building our soon-to-be introduced Irish Bouzoukis.

That’s all on the New Mandolin Family for today. Very soon, I will post an article about a plethora of new mandolin family instruments that we have designed and are ramping up to start building and selling here at Rickert & Hale and our online store Don Rickert Musician Shop.