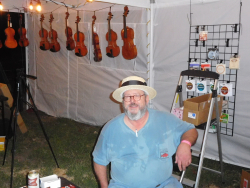 Rickert Musical Instruments will be showing one of its Violoncellos da Spalla, as well as many other great instruments at Hoppin’ John 2022. Our new venture, Rickert & Hale, Luthiers, will have lots of instruments to show and try out as well, including at least one of their new octave mandolins. 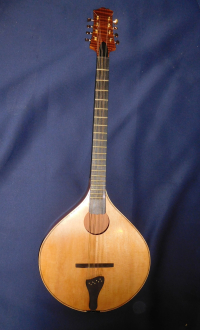 Rickert Musical Instruments (bowed strings), together with its partner, Rickert and Hale, Luthiers (mandolin family and guitars), will once again be showing finished and in progress instruments at the 2022 Hoppin’ John Old Time and Bluegrass Fiddlers’ Convention. The festival will take place September 15-17, 2022 at the Shakori Hill Community Arts Center near Pittsboro, North Carolina. That is central North Carolina. People come from throughout the Southeastern US, including Virginia, Tennessee, South Carolina, Georgia and, of course, North Carolina. 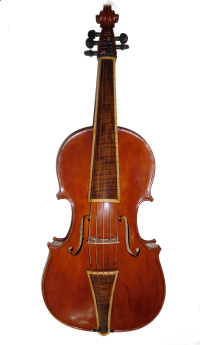 We will have at least one of our in-progress violoncellos da spalla to show. As surprising as it might seem, a large number of American traditional fiddle players and enthusiasts are also baroque music enthusiasts. We have actually sold more violoncellos da spalla at (or shortly following) the Hoppin’ John Old-Time and Bluegrass Fiddlers’ Convention than ANY other instrument.

The in-progress violoncello da spalla that we will be showing is actually available for purchase right now. It is the same model (Standard Model) played by several renowned violoncello da spalla players. If you are interested, feel free to contact us to discuss. We will only be building a few more of the Standard Model; henceforth, we will only be taking commissions for the Standard PLUS Model, which costs considerably more.

This instrument is about the same size as a Taylor GS Mini guitar, with a radical Florentine (i.e., pointed) cutaway. It has a very playable 22.72” scale.

I will post some illustrations of this new instrument in the next day or so.

This instrument has the basic appearance of what most call an Irish bouzouki, but with a shorter 22.72” scale. Irish bouzoukis generally have at least a 25” scale length.

This is the instrument pictured at the beginning of this post. It is a traditional Irish bouzouki with a 25.4” scale.

We are still deciding which ones we are going to bring. Stay tuned for an update on this.

This is a relatively cheap tenor banjo. We have set it up for what is often called “Irish tuning”, which is G D A E, an octave lower than a mandolin or fiddle. We also got rid of the cheesy economy style tuners and replaced them with high-quality proper banjo tuners (Stewart-MacDonald 5-Star).

This “tater bug” mandolin was made in Japan, where some of the best bowl-backs were made in recent times. It is a Yamaha as I recall. Very playable and in excellent aesthetic condition.

A wide selection of strings for most instruments, capos, shoulder rests, and such.

If you don’t know what a violoncello da spalla is, click here for a description.

The short explanation is that it is a very small 5-string cello that is suspended by a shoulder strap and played across the chest more or less under the chin. It is an 18th Century (i.e., Baroque) instrument that is enjoying a resurgence of popularity, particularly among experienced viola players who are Baroque period enthusiasts. Why violists and not cellists? Because of its playing position, one holds the bow like a viola or violin, which is backwards to a cellist. One or two of our customers have actually competed in the “Non-Traditional” fiddle category at Hoppin’ John.

The instrument we will be bringing to Hoppin’ John this year will, barring any miracles, be under construction. You will be able to see the inside of the instrument with the neck not yet attached. We are actively selling this instrument. We know of at least two fiddlers who are planning on using violoncello da spalla in an Old-time string band.

To read about my vision for cellos in general, and specifically the violoncello da spalla, in Old-time music, click here.

This is basically a smallish viola strung and tuned like an octave fiddle. This means that it plays almost as low as a full-size cello. We have brought instruments like this to Hoppin’ John in the past and they have always been a big hit.

This is a essentially a violin with sympathetic strings running under the fingerboard in a channel and then across the lower level of a double-decker bridge. You won’t belief how cool it sounds. The one we are bringing is not super expensive.

A plethora of vintage fiddles and fiddles made by Don Rickert

A nice selection of new and restored vintage bows

We do not any longer try to make money selling bows. Unless a bow is a very special high-end bow, the profit margins are too low for the trouble. That being said, we have several dozen almost new and vintage bows. Some of them are really excellent.

Hope to see you at the Hoppin' John Old-Time and Bluegrass Fiddlers' Convention 2022.